Class 9 Physics Solved Paper 2017 for Federal Board is available in this post. You can see more FBISE solved past papers of class 9 on our website.

(i) The sun is one hundred and fifty million kilometers away from the earth. Write this:
a. As an ordinary whole number
b. In scientific notation

(iii)  Can a body moving at a constant speed have an acceleration?

(iv)  Find the retardation produced when a car moving at a velocity of 30 ms-1 slows down uniformly to 15 ms-1 in 5s.

(v)  Why is it dangerous to travel on the roof of a bus?

Ans.  When a bus suddenly takes a turn, stops, or suddenly speeds up, the passengers on the roof of the bus cannot maintain their balance due to inertia. Therefore, they may fall on either side and may get hurt.

(vii)  In a right-angled triangle length of the base is 4 cm and its perpendicular is 3 cm. Find
a. Length of hypotenuse
b. sinθ
c. cosθ

(viii)  Differentiate between torque and couple.

Ans. Torque:
The turning effect of a force is called torque or moment of the force. The torque of a force is equal to the product of force and the moment arm of the force.
Couple:
A couple is formed by two parallel forces of the same magnitude but acting in opposite directions along different lines of action.

(xi) Why does the value of ‘g’ vary from place to place?

Ans. The value of ‘g’ depends on the distance of a body from the center of the earth. As the earth is not a perfect sphere and its radius is not the same everywhere, therefore, the value of ‘g’ is different at different places.

(x)  Which form of energy is most preferred and why?

Ans:  Solar energy is the most preferred form of energy because it is a renewable form of energy. It does not pollute the environment in any way. We can use it, directly and indirectly, every day.

(xi)  What is meant by the term power? Write its SI unit.

(xii)  A barge, 40 m long and 8 meters broad whose sides are vertical, floats partially loaded in water. If 125000 N of cargo is added, how many meters will it sink?

(xiii)  Explain how does a submarine move up the water surface and down into the water?

Ans. Latent Heat of Vaporization:
The quantity of heat that changes the unit mass of a liquid completely into a gas at its boiling point without any change in its temperature is called its latent heat of vaporization.
It is denoted by Hv.
Hv = ΔQv / m
ΔQv = m Hv

(xv)  Explain why is double-walled glass vessel used in a thermos flask?

Ans. A vacuum flask consists of three vessels. One is the outer casing which simply holds the inner, double-walled glass vessel which is brightly silvered, both inside and outside. This inside silver lining reflects heat back into the hot liquid inside (or prevents heat from entering into a cold liquid). The outer wall is also silvered on both sides for the same reason. Thus, double-walled glass vessel reduce the transfer of heat due to conduction, convection and radiation.

Q4.  a. Derive the formula for the speed of the artificial satellite. (05)

Sol. WORK
Work is said to be done when a force acts on a body and moves it through some distance in the direction of the force. Work is therefore equal to the product of force and distance. It is given by
Work done = Force x displacement
W = FS

Sometimes the force makes an angle ‘θ’ with the direction of motion, then the work done is given by:
W = (F Cosθ) S
Where F Cosθ is the components of force along which the body moves and covers the distance S.

UNIT OF WORK
The SI unit of work is ‘Joule’. It is defined as the work done when a force of one Newton acts on a body and moves it through a distance of one meter in the direction of the force. 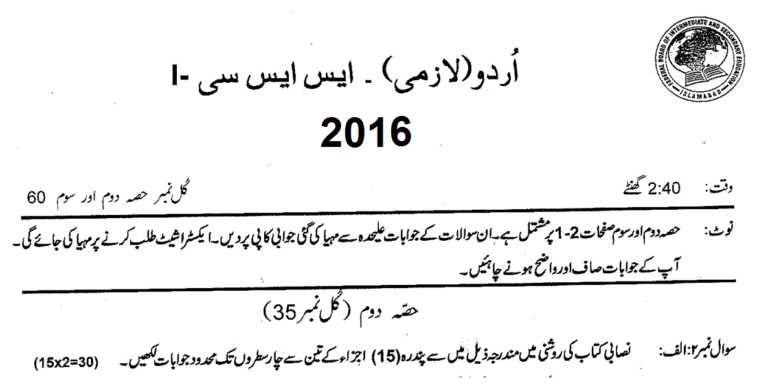