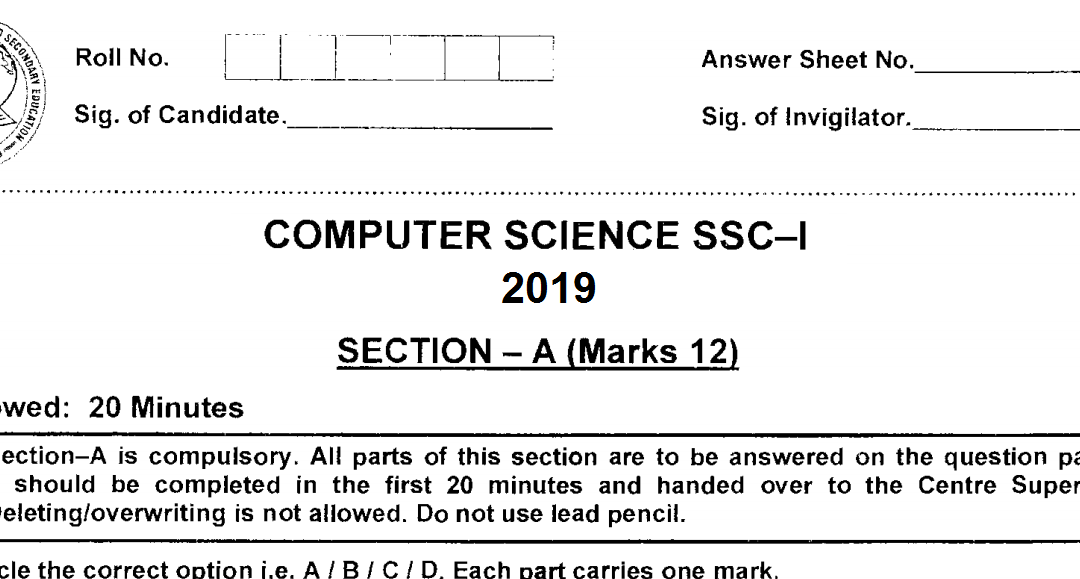 Federal Board, Class 9 Computer Science FBISE Solved Past Papers 2019 is given below. The paper is solved according to the reduced syllabus for the annual examination 2021.

Q.2 Attempt any NINE parts from the following. All parts carry equal marks.

Vacuum tubes were used in the first generation computers.

Integrated Circuits (ICs), also known as semiconductor chips were used in the third generation of computers instead of transistors.

It consisted of a wooden box containing rotating cylinders each of which had digits from 0 to 9.

It could multiply, divide and find square roots of numbers by using simple addition and subtraction. His biggest achievement was the invention of the logarithm.

(iii) Give any three objectives of operating system.

The main objectives of the operating system are convenience and efficiency. It makes the computer more convenient to use. It allows computer resources such as CPU, memory, input/output devices, and the Internet to be used in an efficient manner. It can be viewed as a resource manager.

A Time-sharing system is a feature of an operating system in which multiple users can run different programs on a large-scale computer. It allows many users to have access to a computer at the same time and share the computer’s time. In a time-sharing system, the central processing unit is switched rapidly between the programs so that all the user programs are executed simultaneously.

The operating systems used in minicomputers and mainframe computers support time-sharing. Time-sharing operating systems are used in organizations such as airlines, banks, hotels, universities, etc. where many users need access to the central computer at the same time.

For example, hundreds of students access the university’s mainframe computer at the same time and they run different programs in a time-sharing system in interactive mode.

Attenuation is the fall of signal strength with the distance as the signal travels through the communication media. If the attenuation is too much, the receiver may not be able to detect the signal at all.

Distortion refers to a change in shape or frequency of a digital signal when it is transmitted over a communication line.

(ix) What is bandwidth?

Bandwidth describes the overall data transmission capacity of a medium or channel. It represents the amount of data that passes through a network connection per unit of time.

Bandwidth is also measured in bits per second like data rate.

(x) What is meant by data transmission?

Data transmission is the process of sending data from one device to another. It consists of a sender, receiver, and the medium which carries the information.

There are three modes of data transmission which are simplex, Half-duplex, and Full-duplex.

(xi)  Differentiate between a server and a client computer.

A Server is a main computer in a network which is used to manage network resources and facilitates other computers.

Clients are computers in a network that access services made available by a server.

In a client/server network, the server shares its resources such as hard disk, printers, and Internet connection with client computers.

Information privacy refers to an individual’s right to the privacy of personal information. In the modem information age, people are concerned that computers may be taking away their privacy.

The Data Protection Act (Law) protects the rights of individuals against the misuse of personal information by organizations. Organizations that hold the information should not allow unauthorized people to have access to information or disclose it to anyone outside the organization.

Authentication means identifying a person based on a method such as a Username and a Password, Personal Identification Number (PIN), Access Card, or Biometrics. It verifies who the person is.

Authorization means to give someone permission to do something.

For example, when a user wants to log in to his email account, he is asked to enter a username and Password to verify his identity. This is authentication.

If the correct username and password are entered, the user is authorized or allowed to check his emails, send an email or perform other tasks related to email service. This is an authorization.

Productivity software includes word-processing, spreadsheet, and database management software packages. These software packages are used by individuals to speed up their daily routine tasks by doing their work in an organized and efficient way.

Any software that helps in running a business in a more efficient way to improve productivity is known as business software. Some examples of commonly used business software are accounting, sales and marketing, inventory control, project management, and payroll software.

b. Write a note on Dial-up and DSL Internet Connection.

The main advantage of using a Dial-up line is that it uses a complex network of telephone lines that allows data to be transmitted to almost any location in the world. It is becoming outdated due to a very slow Internet connection.

DSL (Digital Subscriber Line) provides a very high-speed broadband Internet connection. It is called broadband because it has a broad range of frequencies for transmitting digital data.

Any type of Internet speed that is 256 Kbps or above is known as broadband. A DSL modem is required for setting up the DSL Internet connection. Internet Service Providers (ISPs) have several DSL speeds available with different monthly rates.

The transmission mode in which the time interval between each character is not the same is known as `Synchronous transmission. This is shown in Fig.

The transmission mode, in which the time interval between the characters is always the same, is known as synchronous transmission. This is shown in Fig.

Access cards are very similar in appearance to credit cards. They do not require a username, password or PIN. They are commonly used to open security gates in offices and many other places, where unauthorized people are not allowed to enter. Access cards are also used to open barriers in parking areas. They are an alternative to a key for opening hotel rooms, etc.

Q.5 Explain in detail types of network based on geographical area.

Ans: Types of Networks Based on Geographical Area:

The local area network is a commonly used network. It is a network that covers a limited area, usually changing from a small office to a campus of nearby buildings.

Examples of LAN include networks within a school, college, business, and organization. A local area network is shown in Fig.

iv)           Transmission medium is owned by the user organization.

Wide Area Network spans a large area, connecting several locations of an organization across cities, countries, and continents. A WAN is often made up of two or more LANs and/or MANs at each location of an organization and these LANs might be connected together to form a WAN.

Examples of WAN are the networks used in banks, airlines, and national database authorities like NADRA in Pakistan. Internet is another good example of WAN. A wide area network is shown in Fig.

i)             WAN spans a large geographical area. It can connect computers between cities and countries.

iv)           Transmission medium is leased lines or public systems such as telephone lines or satellite links.

A Metropolitan Area Network (MAN) falls between LAN and WAN. It spans an area larger than a LAN but smaller than a WAN. A metropolitan area network is shown in Fig.

Examples of MAN are networks used by telecommunication companies for providing Cable TV and Internet services.

i)             Data can connect computers within several blocks o buildings to the entire city.

Class 9 Computer Science Solved Past Paper 2019 is solved for the students as per the reduced syllabus. The solution will be updated fully after the annual exams 2021. Students are requested to give their feedback in the comments. Moreover, reporting any mistake or suggestion for improvement will be appreciated.