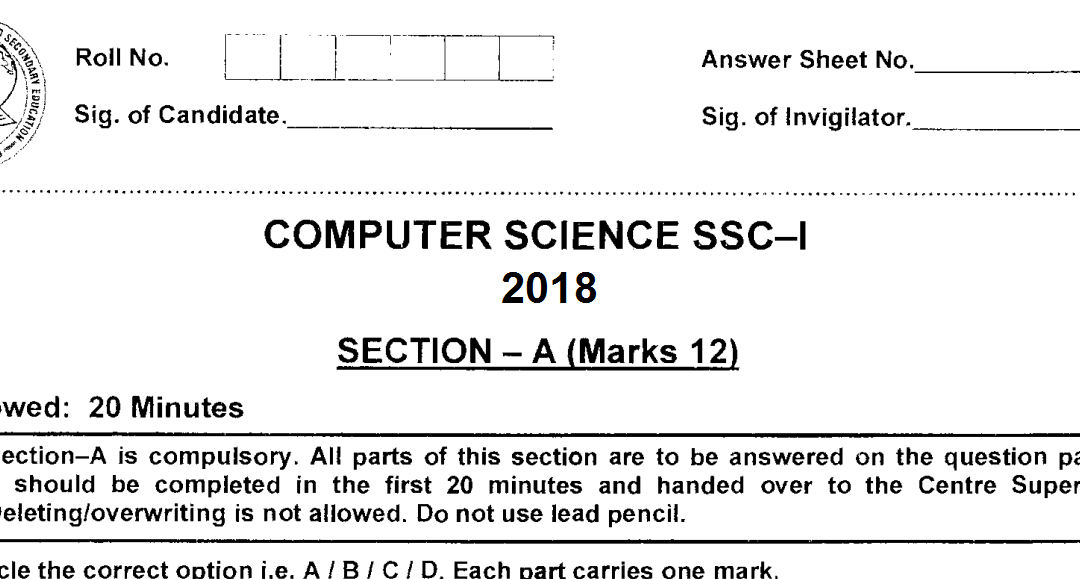 Federal Board, Class 9 Computer Science FBISE Solved Past Papers 2018 is given below. The paper is solved according to the reduced syllabus for the annual examination 2021.

Q.2 Attempt any NINE parts from the following. All parts carry equal marks.

A personal area network (PAN) is a computer network organized around an individual person. Personal Area Networks typically involve a mobile computer, a cell phone, and/or a handheld computing device such as a DA. Users can use these networks to transfer files including emails, calendar appointments, photos, and audio/video files.

Personal area networks can be wired or wireless. USB and FireWire technologies often link together a PAN, while wireless PANs typically use Bluetooth or sometimes infrared connections.

(iii)  Give any three common symptoms of infected computers by malware attacks.

A list of common symptoms of infected computers is given below.

(iv)  Why is operating system important software for a computer? Give any three reasons.

An operating system is an important software for a computer because it makes the compute} more convenient to use. It allows computer resources such as CPU, memory, input/output devices, and the Internet to be used in an efficient manner. It can be viewed as a resource manager. It also performs the following functions:

These are used to control industrial processes such as oil refining. Real-time Operating systems are used to supply an immediate response within a limited time. For example, a measurement from an oil refinery indicating that temperatures are getting too high might demand a quick response to avert an explosion.

CDMA stands for Code Division Multiple Access. It is a wireless cellular communication technology CDMA services include short messaging, voice, data, and video transmission. It can provide a speed of several Mbps for video transmission.

(vii) State any three problems which may occur if a peer-to-peer network is used for a large (WI) number of user in a large organization.

ii) It does not provide centralized security.

iii) No single person is assigned to administer the resources of a network.

The latest version is Mac OS X. It is a UNIX-based user-friendly operating system. There are some specialized versions of Mac OS X used on devices such as iPhone, iPod, iPad, and new Apple TV.

Linux is a free open-source operating system introduced by Linus Torvalds in 1991. It is faster but difficult to use as compared to Macintosh and Windows operating systems.

Its source code is freely available on the Internet. Programmers can view, edit and publish an improved version.

(ix)  Write down a brief note on Asynchronous transmission.

The transmission mode in which the time interval between each character is not the same is known as asynchronous transmission.

(xii) Differentiate between attenuation and amplification.

Attenuation is the fall of signal strength with the distance as a signal travels through the communication media. If the attenuation is too much, the receiver may not be able to detect the signal at all.

Amplification refers to the strengthening of signal to solve the problem of attenuation in data transmission.

An amplifier is a device used in data communication that receives weak signals, amplifies them, and then retransmits.

(xiii) What is network architecture? Name its different types.

Network architecture refers to the layout of a network that consists of computers, communication devices, software, wired or wireless transmission of data, and connectivity between components.

A computer network can be as small as two computers linked together by a single cable whereas large networks connect thousands of computers and other devices.

Three types of network architectures are commonly used which are:

It is an output device that has a screen on which information is displayed.

CRT monitor is very similar to an old television. It is almost obsolete due to its big size and low display quality.

An LCD monitor is slim, uses less power, and has better display quality than a CRT monitor.

A printer is an output device that prints text and graphics on paper which is known as a hardcopy.

There are two types of printers which are impact and non-impact printers. The first high-speed printer was developed in 1953 by Remington Rand (an early American business machines manufacturer) for use on UNIVAC computer.

Such large size printing is not possible on printers. It is more expensive than a printer.

There are two types of plotters, that is ink plotter and pen plotter.

Speaker is a device used to produce audio output. A pair of speakers are attached to the sound card on the motherboard.

Speakers are commonly used with multimedia software and for playing music and videos on computers.

Q.4 Write a note on the following:

A router is a communication device that is used when two networks have to be connected for communication. They send information from one network to another by selecting the best pathway available.

There are two types of routers i.e. wired and wireless.

This router is used to connect wireless devices such as laptop computers and mobile phones to the Internet.

Bluetooth is a wireless communication technology that uses radio waves to connect portable electronic devices over a short distance. It eliminates the need for cable connection and provides fast and reliable transmission.

It supports the networking of a wide range of portable devices that work on low battery. These devices include a mobile phone, mouse, keyboard, wireless speaker, wireless headset, tablet, laptop computer, and personal computer.

A laptop computer has built-in Bluetooth but a personal computer can use a Bluetooth adapter to communicate with Bluetooth devices.

The most common use of Bluetooth is connecting a mobile phone to a wireless headset or to a laptop computer to transfer voice data. Bluetooth technology can transmit text, image, voice, and video.

ISDN stands for Integrated Services Digital Network. It provides a maximum speed of 128Kbps which is more than a Dial-up connection but less than DSL. It can transmit both voice and data at the same time over a single cable It requires that the user has ISDN digital telephone service from a telephone company and uses a faster modem than a Dial-up modem. ISDN service is being replaced by faster DSL service.

Q.5 Define computer ethics and write down some important moral guidelines for the ethical use of computer technology.

We should not use bad language while chatting and social networking. We need to respect others views, and should not criticize people.

We should not pretend as someone else ‘and fool others: We should not download copyrighted material such as music, movies, etc. People should not do something on the Internet that is morally objectionable illegal.

The following are some important moral guidelines for ethical use of computer technology.

ii.             Computer users should not break into others’ computer systems to steal, change or destroy information,

iii.            Computer users should not read documents and e-mails of other users without their consent.

iv.           People should not make illegal copies of copyright software and sell it for financial benefit.

v.            Computer users who have special computer knowledge and ability should not create malicious software (such as computer virus) and spread it to other computers.

vi.           People should not commit any type of crime with the help of computer technology.

vii.          Computer users should respect the privacy of others.